Run for the Kids – and Running For Me! 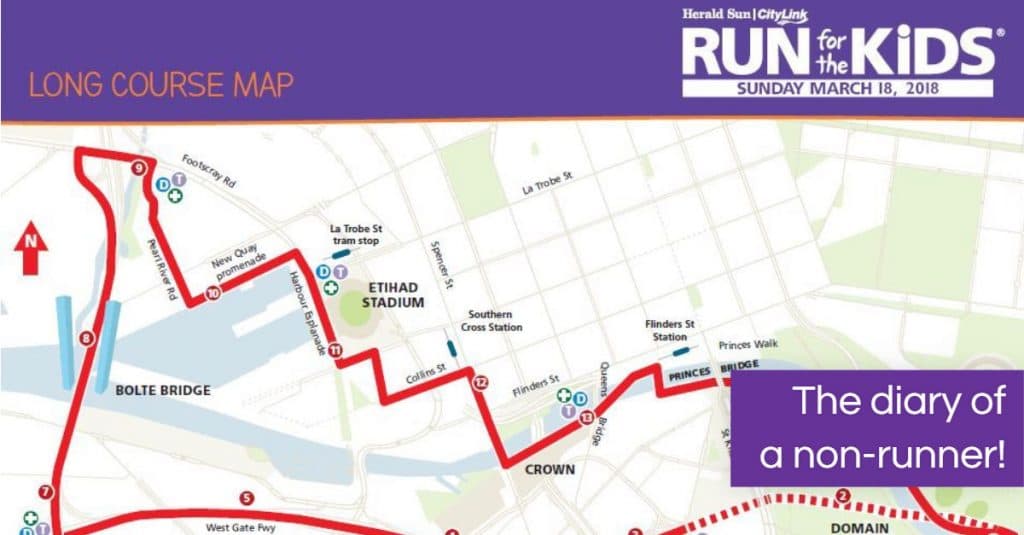 But after a little bit of optimism, a lot of hard work, and more curve balls than I think is fair (!!!), here is my account of a non-runner becoming a runner (at least for one run).

About 8 years ago, I did my first ever fun run. It was the Run for the Kids 5km short course. After I finished, I remember watching runners crossing the line after completing the 15km long course, imagining the sense of achievement they must be feeling. I decided that day that I too wanted to experience that feeling.

So, after a lot of years of thinking (I drive over the Bolte Bridge every day and think about how awesome it would be to run over it!) and not much doing, I decided at the end of last year (after a little lecture from one of my favourite trainers!) that 2018 would be the year for me to stop putting work and everyone else’s needs before my own and concentrate on achieving my health and fitness goals.

Anyone who knows me knows how much I hate running… it’s just not my jam! So of course, the obvious next step is to enter yourself into a 15km fun run, right? Apparently, my stubbornness (although I like to call it determination) is stronger than my hatred of running!

How to start running… when you HATE running

I knew that training for a 15km run required more than just running long distances. It required a carefully planned training program with a mixture of interval training and long runs. Beyond that, I had no idea where to start! My first step was to find myself a running group. After a lot of research, I came across a group that looked perfect for me… you had the option of doing 1 or 2 days per week and it came with an extensive training program across 9 weeks. However, the part that appealed to me most was the fact that the training happened in a loop, and so could accommodate people of all different fitness levels. Perfect for someone who is a very slow runner – you could run at your own pace, and not have to try to keep up with faster and fitter runners.

And so, the training began. The first 3 weeks started well. I managed to fit in my long runs around the running group and CrossFit training and was on track to reach the 15km target, having completed a 6km, 7.5km and 9km run in that time. However, during the 4th week of training, I was feeling just generally sore and tired. I turned up to the running group that Friday morning after a heavy week at the gym and mentioned to the trainer how I was feeling. That week’s long run was due to be a 7km run. Seeing it was less than the 9km from the previous week, I figured it would be ok if I missed that run and let my body rest. Knowing what I am like and how quickly I burn out, it seemed like a smart decision, allowing me to pick up the training the following week and have a better chance of completing the program.

I spoke to the trainer and explained my thoughts to her. I told her I was sore and tired and was going to rest that weekend. Her response shocked me! She told me that it wasn’t possible to do CrossFit at the same time as training for a run and that I shouldn’t take the weekend off to rest as I needed to get the kilometres into my legs otherwise I would get injured.

As a physiotherapist, this advice horrified me!

Every single day when I go to work, I tell people to listen to their body. I work with my patients on load management and how to achieve their goals without getting injured or without making injuries worse. To hear someone give the complete opposite advice scared me. If someone had come into my rooms telling me they were sore and tired, I would have told them to rest. I would have said that they are better to miss one training session and pick up where they left off than push through and risk injury. I am lucky that because of my job, I could recognise this as bad advice. But what if I had been just another person off the street without my knowledge, blindly trusting in the people that were training me? What a recipe for disaster!

As it turned out, the conversation was irrelevant, because as we got to the end of that training session, I got injured. We had been running a loop that had a small incline as you were coming around a corner. I was accelerating up the incline at the same time as I turned the corner and felt a sharp pain in the front of my left hip. I thought I could run it out but as I finished the last 2 laps, the pain continued to get worse. As the day went on, the pain increased and I could barely walk. Things were not looking good. It was the 9th of February and the run was on the 18th of March… I had 5 weeks to recover and somehow continue my training.

Needless to say, I spent the next week doing not very much. I didn’t train and I didn’t go to the gym. I had decided that I would go to the running group again on Friday morning and see how I felt, then make my decision about whether or not I would continue training for the run. To my disappointment, I was still very sore and ready to give up.

I spoke to the trainer again and explained my injury. I asked her what the best options were for cross training to still continue to build my fitness without running and further aggravating my injury (I had read somewhere that swimming was just as beneficial for building cardiovascular fitness as running and wanted her opinion on this). Her response astounded me, once again! She said that there was nothing and that running was the only thing. Feeling extremely dejected, I resigned myself to the fact that my goal would have to wait another year.

I decided that I should have my injury assessed and booked myself an appointment with a physiotherapist that my family has been going to for as long as I can remember. Our trusty physio previously played AFL football and has a strong interest in sports injuries so I thought that if anyone could help me, he could!

I went into my appointment and explained what had happened. Naturally, as always happens when I go into the physio, he asked me what I thought I had done. I told him that I thought I had strained my TFL (tensor fasciae latae) – a muscle on the outside of the hip which assists in keeping the balance of the pelvis while standing, walking, or running. After a thorough assessment, he agreed. Although it is not common to strain the TFL, it is a muscle that is commonly overloaded due to weakness of the gluteal and hamstring muscles – both of which I know I have difficulty in activating.

I told the physio about the run and said that I thought I may have to pull out of the run because I didn’t think I would have enough time to recover and get all the training in. He disagreed! He told me that I should base my training on time, and not worry about distance covered and that I should cross train using other methods such as swimming or cycling to build cardiovascular fitness without aggravating my injury. So, if I thought the 15km run would take me 2 hours to complete, then I should train for a total of 2 hours, whether it be running until I reached a 3/10 level of pain and then walk the rest of the time or combine swimming and cycling for a total 2 hours. The complete opposite to the advice I had been given by the trainer!

I left my appointment with a strengthening program and a new-found optimism that I may still be able to achieve my goal!

Over the next few weeks I set about cross training – continuing to work on my fitness and focusing on time rather than distance. I continued to attend the running group but was careful not to aggravate my injury.

Two weeks out from the run, I was feeling good again – I was running with only slight pain and had managed to run 13km. Things were heading on the right track…

Until the week before the race! It was the long weekend and I finally had some time to unwind. As usually happens with me when I get a little bit of rest, I came down with a cold! This was the last thing I needed! I was definitely starting to feel like this run was something that was not meant to happen.

But… I had come this far, and I wasn’t going to let a pesky little cold stop me! My goal for the last week before the race was to rest as much as possible and to make sure I was as good as I could possibly be.

Race day. Bring it on!

Race day finally arrived and I was ready to go. I had set my goal of running the full 15km without any stops. I didn’t care about the time, I just wanted to finish without stopping to walk.

The weather forecast was horrendous: rain and a strong head wind were predicted.

I started the race, only to get a stitch within the first kilometre. I felt like a crazy person – I was talking to my stitch saying “I’m not stopping so you may as well go away”! Eventually, it did. I kept putting one foot in front of the other, until I finally made it to the finish line. It was tough and it was painful but I got there, and it felt every bit as amazing as I had imagined it would! I still find it hard to believe that this girl who hated running somehow managed to run 15km and did not stop once!

So, the top 3 things I learnt while training for Run for the Kids…

We are Here to Help! Booking Online is the most convenient way to lock in the clinician & time you want.